I dropped in to my local KTM dealer today to look at a new small bike, and the salesman happened to be outside showing another customer a 1190 that was about to be collected by its new owner.

Unprompted, he handed me the key to the demonstrator and told me where to go (as it were!). He went through the various electronic systems on the bike, how they were set up and how to change them, and I was on my way. 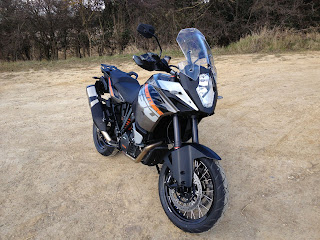 The engine is silky smooth, and very willing with plenty of power and torque. The brakes were very powerful too, and it was very easy to ride it quickly. 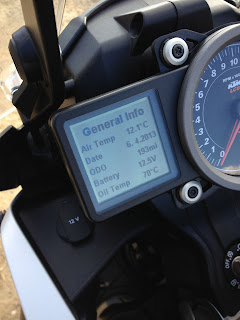 As you'd expect with road wheels and tyres, it corners very nicely and is very easy to haul around as it's physically smaller than the 990.

However, having said all that, I was disappointed with it.

The first time I rode the 990 it had a 'wow' factor in how something so big could be as agile as it is, and it looked different to everything else out there. People would stop and ask what it was, and of course it was a dual-purpose bike with lots of off road ability.

The new one simply lacks character, and with the floating screen it looks like the BMW GS and the Triumph Tiger. There's nothing distinctive about it, apart from the graphics, if you can call them that, which look messy.

The seat isn't as comfortable as my standard 990 seat, and after an hour I could feel it. Being smaller, the riding position felt slightly cramped compared to the 990. I'm told that the optional comfort seat is... err... comfortable.

Something that seems completely bizarre is that it doesn't have always-on headlights: the bike chooses when to turn it on, and you cannot override it. I know there are the LED daytime running lights, but in poor visibility like mist, falling snow etc. I'd like to have the light on. From experience in cars, automatic lights don't come on when it's bright but the visibility is poor, but at least you can turn them on manually in the car. 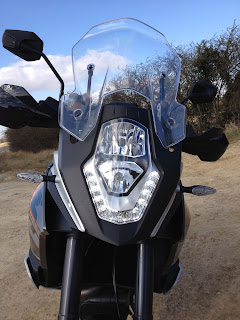 Even the controls lack any sort of feedback: the indicator switch doesn't really move, and I was always a bit unsure if I'd actually switched them or not.

There's no red line on the rev. counter, just a red light that comes on when you've overdone it - by which time it's a bit late and you're on the limiter.

From the figures I've seen, it's heavier than the 990 (199Kg / 230Kg), and I don't know how well the glossy plastics and LED indicators would stand up to an off road tumble.

It reminded me of driving a BMW car: a masterpiece of technology and engineering, but lacking any character.

If I were in the market for a road bike, I might consider one: but there are plenty of alternatives that are cheaper and probably more engaging - possibly even the SMT.

I'd like to try the R version, ideally off road, to see if it can win me over but unfortunately the standard model doesn't really suit its 'Adventure' tag as it's just another road bike. It's a clever one, but it's a road bike none the less.

...but that's probably what most people are told they want by the bike magazines. 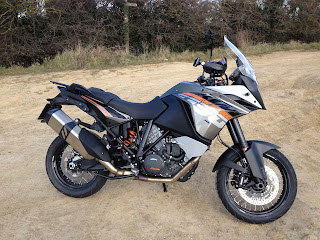 With thanks to Gear 4 Motorcycles, Market Deeping, Lincolnshire, for offering me their demonstrator for a ride.
Email ThisBlogThis!Share to TwitterShare to FacebookShare to Pinterest

You can click on most of the photos to see a larger version.

All of the photos are mine unless otherwise stated.